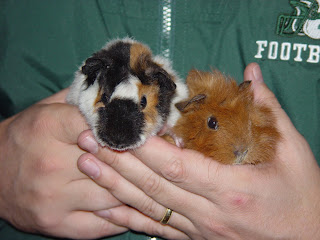 Meet the newest members of our family, Sugar and Cinnamon. Grace opened her first gift from us this morning before pancakes, a pink Bible. Then we told her to close her eyes. She opened them up to see a new hamster cage. We originally were thinking of getting her a hamster but after talking with some friends, changed our minds to guinea pigs. Yes, I can hear some of you laughing out loud right about now! Those of you who know us are quite aware that we have had dogs, a cat, a turtle, rats, mice, lizards, hermit crabs, fish, a bird, tadpoles, frogs, butterflies, rabbits, a couple of ant farms and now we can add guinea pigs to the list. 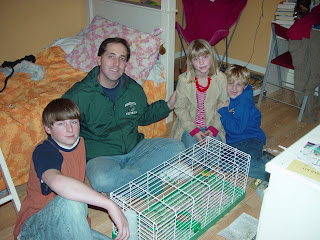 This is the gang, putting the cage together in Grace and Meg’s bedroom tonight. The kids were so excited. We had originally planned to only get one, but of course they are brothers and we felt sorry for the one brother guinea pig being left behind. And YES, they are both BOYS…we don’t want any baby pigs arriving anytime soon. 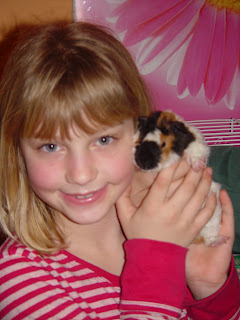 When Gracie heard her father tell the salesperson that we would be getting both of the guinea pigs, she was so excited. When we got in the car she let her younger brother Samuel hold the box with the second little critter inside. She said, “Samuel, you can pick out the name for that one if you want to.” How sweet is that? So now Samuel has a guinea pig of his own too. It adds some credence to that famous birthday song and its lyrics, “Today is your birthday, it’s my birthday too, YA!”