Do you see this handsome chap below? (The one without the hairy face.) He is my son David. And, today, my heart is overflowing with mom-pride. 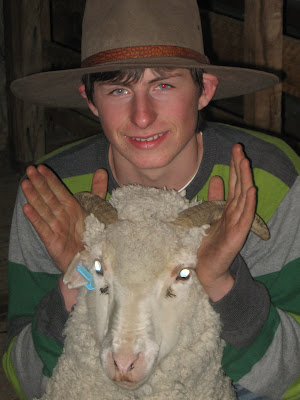 When friends from Australia encouraged us to come out for a trip last year, we were thrilled. While our hearts screamed, “YES!”, our bank accounts screamed, “NO!”.

“Dad, would you and Mom let me go if I raise enough money for myself?” David asked.

Seeing a great hard-working lesson in the making, Paul took full advantage of it. “Son, the trip is going to cost more than you think. The passport will be over $100.00 and your round trip ticket will be close to $1000.00… and David, we aren’t going to give you any money. If the Lord has opened up this door for you, you will have to figure this out together.”

That’s all it took. At fourteen years old last summer, David was too young to officially get a job, so he worked as a referee for soccer games and babysat every child within a five mile radius of our home. With those earnings he purchased his passport and later bought a pig through his high school F.F.A. to sell at fair this summer. 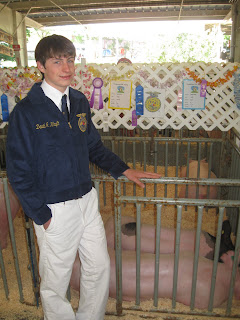 Rightly naming his pig, “Australia”, thirteen of our friends and family crowded the bleachers and cheered our son onto victory as he placed third overall at the fair, ranking above one hundred other pig entries. Earning enough money to pay for his whole Australian experience plus another $40.00. (God always gives us more, doesn’t He?)

Three days later David was on a plane headed for the land down under.

At fifteen years old, just shy of sixteen, David stayed with our friends in the outback on their 3,000 acre sheep ranch. Our son was in time to take part in their sheep-shearing week, thus the picture above with his hairy friend.

After three weeks, David arrived home on his international flight. Joy doesn’t even describe the feeling of having him home again and in our arms. Our son learned quite a few lessons this year. He learned that when the Lord opens a door, our part is to work alongside Him to make it happen. He learned to say “How can I do this?” instead of “I can’t do this.” He learned he belongs to a God who does exceedingly abundantly more than we can ask or think.

And, he learned why Vegemite will NEVER be a hit in America.

We are so very proud the Lord gave us this young man to raise.

Now all glory to God, who is able, through his mighty power at work within us, to accomplish infinitely more than we might ask or think.
Ephesians 3:20 NLT