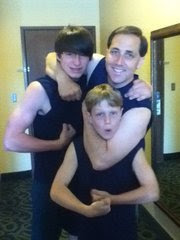 “Dad will love this!” David grabbed the navy blue t-shirt off the rack and shoved it under my nose.

Had my teenage son lost his mind?

“Oh, son, you’ve got to be kidding me. Your father would never be caught dead in that.” Visions of my 80’s high school years and a parade of muscle-shirt-wearing teen males flashed before my eyes.

“Awww, cmon’ Mom. We could get one for Sam too.” Master manipulation at its best. He knew to include his little brother (who thought he hung the moon) into his diabolical plan. “We could match out on the beach.”

“You’re father would not look good in that, David. It is SO not his style.”

My son walked up and put his arm around me, whispering loudly in my ear, “But, you know how good I’d look in it.” He smiled, flexing his one free arm for me.

His newfound muscles were getting lots of attention lately. “Law and Order. That’s what I named them, Mom.” David smirked, unwrapping me from his hug and kissing each bicep.

Unpacking in the hotel room, the boys knew I’d had a weak moment at Walmart and were so excited they could barely stand it. I grabbed the secret bag and opened it up, tossing navy blue t-shirts to all the boys.

My husband unfolded his, “What’s this?”

I’m married to an amazing husband and father. Amidst the audience of snickering and laughter, he put on his new shirt and I snapped a photo.

Two hours later we were all at the beach.

Eight hours later he was nursing the most ridiculous sunburn I’ve ever seen.

What about you? Do you ever step out of character for your kids? How have you surprised them lately?