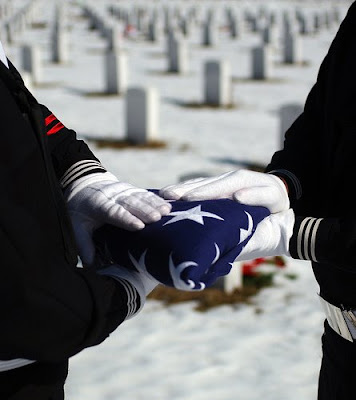 As a teenager, waking up first to get in the shower was important. I had to beat my two sisters because I needed as much time as I could to get that “big 80’s hair”. Each morning when I would shuffle to the bathroom half asleep, I would see my father sitting at our kitchen table.

In the early morning silence, he would be reading his Bible while finishing his cup of coffee. With my eyes half open, I would kiss him good-bye. Lunch pail in hand, my Dad would walk out the front door, hang his American flag and head off to work. Day in and day out, this was his routine.

Each and every morning, my father flew that flag.

One gloomy winter day, as my father was hanging his flag, our neighbor Sid came over. Marching across the street with purpose, he held a small booklet titled Flag Rules and Regulations firmly in hand. Sid made sure to give my Dad an earful when he saw in this steady drizzle, Dad had not taken down our American flag.

Friends, today is Memorial Day. A day to remember those currently serving, and many who have given the ultimate sacrifice. Go up to a Veteran and say, “Thank You.” Better yet, teach your children to walk up to someone in uniform and say , “Thank You.”

Take a moment to offer up a prayer for all of the men and women who have fought in the rain for you.