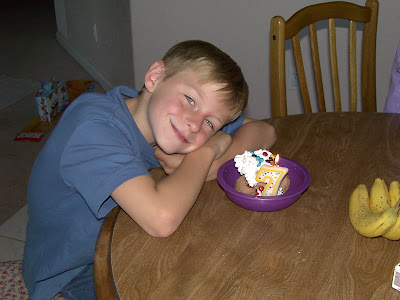 This is a picture of my son David. It was taken on his seventh birthday, when he was just about half the age that he is now. While sitting in church together on Sunday he put his hand in mine. It was then that we both realized, his hands are now bigger than mine. This precious little boy who I cuddled and kissed, who would do anything in the world for his mommy, is now almost standing eye to eye with all five foot six of her.

His father took him down to sign up for Freshman football this evening. We are both very hesitant about him playing to begin with, but it is what he wants to play and we told him that if he did well in school and got a 3.0 GPA we would consider letting him play. His father, my husband is the Freshman football coach for the high school he will be attending next year which makes David want to play even more. What is going on here? My son is going to play high school football? When did my baby start growing up?

You know how us mom’s, every once in awhile stop and realize that our children are no longer small little itty bitties anymore?

Today is that day for me.